Late last year I was asked by the College of Professional Studies at Humboldt State University to make a promotional video for their Recreation Management Program.  In order to get the best footage of the program’s opportunities for students I chose to tag along with the Winter Adventure Leadership class on their culminating field project:  surviving four days in the winter wilderness up on the side of a mountain.  Here is the video that resulted from that field project.  The story behind the video follows beneath it.

I had never shot video in snow before, let alone a mountain wilderness setting, so it was a learning experience for me.  I researched the equipment that I would need and how to use it.  What I didn’t already own I had to rent, borrow, or buy.  I hired a Rec.Mgmt. student who had done the class before to be my guide.  Together we plotted out the travel/hike/shoot schedules with plenty of wiggle room for unexpected delays… except there was more wiggling than I expected.

The first delay happened on our way to the trailhead.  We were driving on a plowed, back country road looking for a poorly labeled intersection when suddenly the plowed road segued into un-plowed road and we slid straight into a 4 ft. snow drift.  We were platformed on top of 2 ft. of solid snow/ice.  It took us an hour to dig/push the car out that situation.

The second delay happened on our hike up the mountain, which took twice as long as we had planned.  This was mostly due to the fact that I was carrying 80 lbs. of camera gear, I had never snow shoed before in my life, and I may have been just a little bit out of shape (too much time sitting at my desk editing video!).

We reached base camp 2 hours behind schedule.  I had only planned on shooting for 6 hours so there was precious little time left.  After hydrating and eating a small snack, I immediately began shooting the students as they excavated their snow dwellings.  I managed to coax a few of them away from their duties to be interviewed.  I also set up a time lapse camera on the camp’s periphery in the hope that it would capture something interesting.  I didn’t want to miss anything.  It’s always better to have too much footage in the editing room than too little. 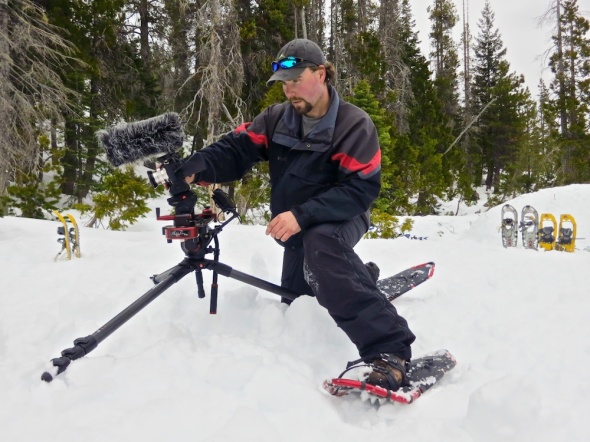 I didn’t want to stop shooting but it was getting dark and beginning to snow.  We packed up and began hiking down the mountain about 1 hour behind our now-shattered schedule.  Luckily, it took us half the time to hike down as it did for us to hike up, so we ended up reaching our car just as the last twilight left the sky.  We only had to wear our headlamps for the last 10 minutes of the hike.

Did I mention that the trail head was 4.5 hours from my front door?  We had left at 3am and we didn’t get home until well after midnight.  Boy, what a day.  And the next day was something else as well.  I could barely walk my legs being so sore from all the mountain snow shoeing.  But it was all worth it.  I got some great footage and some great stories from those students, and it turned out to be a pretty good video I think.  Just next time, I might opt to get a hotel room closer to the trail head, and I might take those back-country roads a little slower too.

Tip:  One of the challenges of shooting in the snow is that the Auto Exposure camera function will underexpose your footage if you rely on it.  This is because it uses an average value of brightness in the frame to achieve a balanced exposure, and a snowy landscape is very bright and occupies a lot of the frame area, so the camera lowers the exposure to balance it.  The result is that the snow looks greyish instead of bright white and everything else (like someone’s face) looks very dark.  The solution is to use Manual Exposure.  However, if you manually set your exposure to be perfect for someone’s face then the snow surrounding them is over-exposed.  So I set the exposure so that the snow was just under 100% luminosity.  This resulted in slightly dark faces and figures, but the detail in the snow was preserved.  Then later, while editing the footage inside Final Cut Pro, I used a Three-Wheel Color Corrector filter to raise the mid-tones so that people’s figures and faces were brighter but the snow kept its detail.